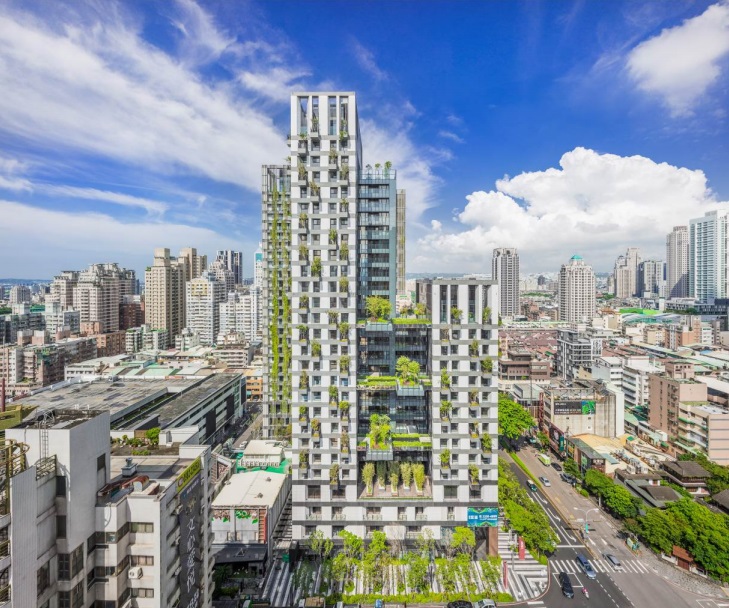 29 November 2019, Taichung, Taiwan — WOHA announces the completion of their first project in Taichung, Taiwan. In 2012 WOHA was invited by the Taichung City Government and Feng Chia University to bring its exhibition “Breathing Architecture’ to Taichung. This exhibition was part of a program initiated by the city government’s Gateway Project Masterplan which focused on the design principles of sustainability, low carbon emissions and smart cities. The government was in the process of drafting new regulations to make Taichung a greener, more liveable city in its next phase of development.

The developer Golden Jade, with Feng Chia University as an advisor, commissioned WOHA to design a green and sustainable mixed-use development in the heart of the city, the first of its kind in Taichung. Sky Green comprises residential apartments and retail shops, as well as generous recreational facilities in two towers.

“We are very happy to have been a part of this collaboration between policy makers, academia and the private sector to design the future of sustainable housing in Taichung” says Mun Summ Wong, founding director of WOHA. “One building can’t change a city but we hope that Sky Green is the first of many more.”

Green landscaping is a key material palette in creating building envelope for the rising residential towers as well as bringing nature into high-rise living. Tower A apartments have extended balconies with trees and Tower B apartments have a soft, green creeper mesh screen on their facade. Skygardens at every 5 floors within the block dissolve boundaries between interior and exterior as the residents enjoy nature and fresh air in a high-rise environment.

“Working with WOHA on Sky Green has brought a global perspective to our company vision and sustainability goals” says David Zhang, chairman of Golden Jade Corporation. “Sky Green was first conceptualised seven years ago and WOHA came on board a year later. Now, after 5 years of construction, we are happy to present the outcome of this collaborative effort to you.”

WOHA has developed their designs over 25 years and many prototypes have been successfully built in Singapore and other regions. The design of Sky Green has been adapted to suit the local culture and subtropical climate, as well as to ensure safety during earthquakes and typhoons. As the first high-density development in Taichung that also provides high amenity with its generous recreation facilities and ample integrated green spaces, Sky Green will be influential in defining the new benchmark of sustainability and skyrise greenery for the city’s future developments.

WOHA was founded by Wong Mun Summ and Richard Hassell in 1994. Rather than being overwhelmed by the challenges of climate change, population growth and urbanisation, the Singapore-based practice researches and innovates new architectural and urban solutions to tackle the problems of the 21st century.

WOHA has accrued a varied portfolio of work and is known for its distinct approach to biophilic design and integrated landscaping. The practice has won a number of architectural awards, most recently the 2019 Urban Habitat and Best Mixed-Use Building awards from the Council of Tall Buildings and Urban Habitat (CTBUH) and 2018 World Building of the Year for Kampung Admiralty and 2018 Best Tall Building Worldwide for the Oasia Hotel Downtown.

The practice currently has projects under construction in Singapore, India, Bangladesh, China, and Australia.