2021 Architects’ Election of Board Members

2021 Architects’ Election of Board Members

(1) The Board will be conducting the election of Architects to serve on the Board for the new term commencing in Jan 2022.

(2) Under the Architects (Amendment) Act, 2005, the constitution of the Board shall consist of the following members:

(3) Registered architects of at least 10 years’ standing and holding a valid Practising Certificate (PC) may be elected as members of the Board.

(a) he is neither a citizen nor a permanent resident of Singapore;
(b) he is an undischarged bankrupt or has made any arrangement or composition with his creditors;
(c) he has been convicted of any offence involving fraud, dishonesty or moral turpitude, or of any other offence implying a defect in character which makes him unfit for the architectural profession;
(d) he is of an unsound mind or is incapacitated by physical illness; or
(e) he has at any time after due inquiry been found guilty by a Disciplinary Committee of improper conduct.

(5) The time frame and process for the 2021 election exercise is set out in the table below for your noting: 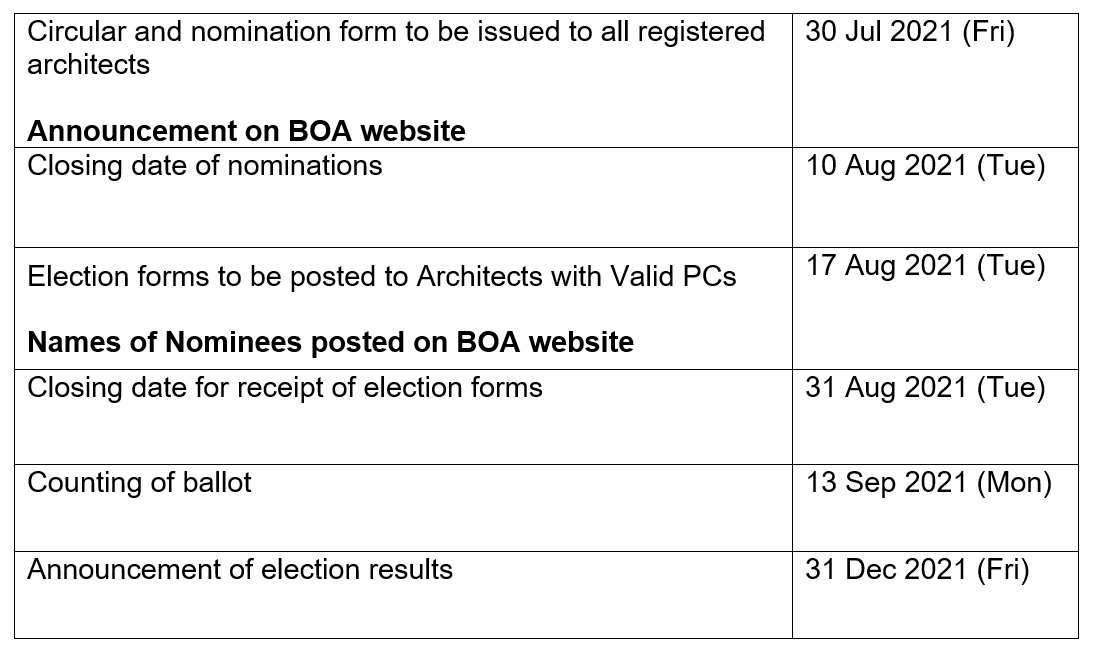 (6) You can download a copy of the Nomination Form for the 2021 Election of Board Members from this link. Separate forms are to be submitted for each nominee. I wish to highlight the following rules for your attention:

(a) Voting is compulsory for all registered architects with a valid PC. Those who failed to vote shall not be entitled to apply for a PC in future years unless he satisfies the Registrar that he has a good and sufficient reason for not voting in the election; or pays to the Board a penalty of $300 for not voting. NO WAIVER will be given.
(b) Only architects who hold a valid PC may participate in the nomination and election process. Architects who do not have a valid PC and wish to participate in the nomination and election exercise can apply for their PCs before 3 Aug 2021 and 10 Aug 2021 respectively. Late applications will not be accepted.